Tab Laven is a highly gifted guitarist, banjo player and songwriter who started his career 40 years ago working with Mary Macgregor. Over the last two decades Tab has worked with George Jones, Bruce Johnston (Beach Boys), Harry Connick, Jr. and many others. Tab is a perfectionist - an attribute he shares with Art.

“I first met Art in 2001,” recalls Tab. “I was renting a house in Nashville from Buddy Mondlock's fiancé. Buddy, at that time was working on a recording project with Art, along with Maia Sharp called, ‘Everything Waits To Be Noticed.’ When I was introduced to Buddy and he told me was working with Art, I immediately said to him, ‘If you ever hear that he's looking for a guitar player, I'd like to put my name in the hat’ and I wrote my name and number on a slip of paper and handed it to Buddy. Apparently, that same afternoon when Buddy and Art were in the studio, Art casually asked Buddy if he knew of any guitars players in Nashville that might be suited for this gig. Buddy reached into his pocket and pulled the slip of paper out and handed it to Art. Buddy called me the next morning and said, ‘You're not going to believe this...’. A bit of time passed and then lo and behold, I got a phone call from Art, who then flew to Nashville to audition me and I got the gig. Timing is everything!”

Tab started playing with Art in 2003, joining in his 4-piece band. “It was a great gig and along the way I played with some amazing musicians, Warren Bernhardt and Clifford Carter on piano, and Clint de Ganon & Tommy Igoe on drums” says Tab. “We even had the amazing drummer, Steve Gadd join us on a tour. I was now part of that famous Garfunkel sound.” Tab recalls his early career, “at 21 years old I moved out to Los Angeles and ended up playing guitar for Mary Macgregor, whom at the time had a huge #1 hit with, ‘Torn Between Two Lovers’. We toured the world! After several years, I eventually found my way back home to Minnesota where I ended up touring the country with Lorie Line, a new-age pianist based out of Minneapolis. So now it was 1997, and I was sitting in my living room when the show ‘Across America’ came on PBS. It was Art Garfunkel in concert with his band. Watching the show by myself, I said out loud, ‘That’s my gig!’ I had always been a fan of both Art’s solo career, as well as Simon & Garfunkel’s. At that time I didn’t know anyone even remotely connected to him or his world. Four years later the phone rings and the voice on the other end say’s, ‘Hi Tab, this is Art Garfunkel and I heard you’d be interested in auditioning for this gig’. It’s amazing how when you put something out into the universe that you have such belief in, opportunity comes knocking.

“After a few months and a few phone calls between Art and myself, I picked him up at the airport in Nashville. We passed by each other a couple times in the terminal and then hopped into my car. For some reason and I’m still not sure how it came to be, it had been arranged for my audition to take place in Garth Brooks manager’s office on Music Row. A little surreal, but I went in full of confidence, with just a few butterflies fluttering about. We sat facing each other and he called out songs and I managed to play most of them from memory. There were some that I knew how to play that he hadn’t done live before, so he called his office in NYC and had them fax the lyrics to him. Art was talkative and funny, making it very light and laid back. We seemed to connect a bit, we had lunch, went through a few more songs and then I drove him back to the airport. A week or so later I was flying to New York City for rehearsals with his band for a few shows in the states and then off to Europe for a month!”

How did the current tour come about? “I got the call from Art in May 2011,” Tab recalls. “He hadn't sung in months because of an injury to his throat. He said, ‘Tab, I need to sing with just an acoustic guitar and someone I trust. I thought of you.’ Thus, began the last five years on the road with Art. From singing in his office in Manhattan to regional theaters (while regaining his voice) to selling out Carnegie Hall.”

Art and Tab will continue to tour throughout 2017.

Tab currently resides in Nashville, TN with his wife Annie. 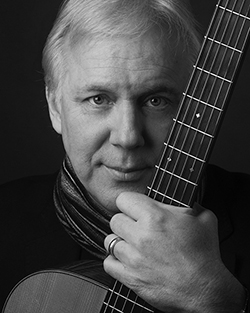