From a 2014 Rock Cellar Interview

Rock Cellar Magazine: When did you first become enraptured with music and singing?

Art Garfunkel: You wanna know the absolute truth? That happened when I was about five years old. I heard my parents playing When the Red, Red Robin (Comes Bob, Bob, Bobbin’ Along) and heard them harmonize a little bit in the same Everly Brothers harmony that I picked up on—the interval of thirds. Dad was an amateur piano player, just faking it. My dad and mother both had decent pitch so they would sing a little. I remember hearing Enrico Caruso on the Victrola and I thought to be able to hit those high notes and be such a dramatic singer of arias was wonderful.

I emulated it when no one was looking and when no one was around, preferably in tiled rooms—the bathroom the hallway, at school in the stairwell. By the time I was in first grade I would be lingering after the kids left school in the stairwell singing to my own ears pleasure and starting to feel like I’d been given a gift.
As long as you’re private about it, you don’t need to sing for anybody, you don’t want anybody’s opinion, you just sing for your own ears and then you do it again a half key higher.

Rock Cellar Magazine: There was a wire recorder in the household and you used that to improve as a singer?

Art Garfunkel: My Dad bought a wire recorder and I remember the phrase, “Now I’ll play it back and hear what it sounds like.” I was my father’s son and I was putting down some of my vocals. By the time I met Paul Simon at age eleven, wire recorders in America were changing to tape recorders so we started putting our vocals down and now we were the record producer in a way. We were starting to tape ourselves. I wasn’t my parent’s kid; I was a singer who could sing with a new pal who could harmonize with me.

Rock Cellar Magazine: When did you come into your own as a singer?

Art Garfunkel: By the time I was six and singing these inspirational goose bump things I was rooted in a singer’s identity. I owned the act of singing. I was an enhanced kid through this godly gift. So it didn’t take Paul (Simon); it didn’t take The Everly Brothers and it didn’t take rock and roll to give me an identity. I was there by age six as a singular guy. I would sing in the synagogue and I would see that people were moved to tears when I sang these ancient melodies in a minor key; all stuff to confirm that God had given me a gift. I would bring it into the talent shows in school and sing Stephen Foster songs. My main song was Too Young by Nat King Cole, (sings) “They try to tell us we’re too young…”

I got a lot of mileage in in the 4th grade with that; the girls thought I was a blonde cool kid. Paul Simon was in my school. We weren’t in the same grade but I believe he was in the audience going, “Garfunkel has found the way to reach the girls.” (laughs) 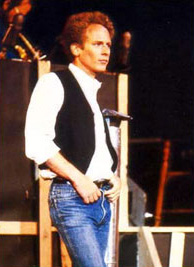