BRIDGE OVER TROUBLED WATER was released as a single in January, with the album being released in February. Both the single and the album would hit the top of both charts in the US and the UK. In fact, the album remained on the best selling charts for 85 weeks in the US and an unbelievable 285 weeks in the UK. "Bridge Over Troubled Water" also had the distinction of being the first single to top the British and American charts simultaneously. Although "Bridge..." has since been recorded over 300 times by many fine singers, it is Art Garfunkel's rendition that, to this day, is still the definitive recording. Art's vocals on this song are extraordinary. Many years after its release, Paul said that Artie's rendition is still the best. After the release of BRIDGE OVER TROUBLED WATER, Art Garfunkel took a long vacation, retreating to a Scottish farm in the Hebrides, with his girlfriend Linda Grossman. Over the years, Art will travel extensively throughout Europe, and around the world. He will travel alone or with a close friend. His mode of transportation will vary; car, motorcycle, ship (freighter across the Pacific & Atlantic), train, plane, and of course by foot (across Japan, America and Europe).

In the Spring, Simon & Garfunkel toured Europe, opening at London's Royal Albert Hall on April 25th and continuing with concerts in Amsterdam and Paris, as well as several shows in the U.S. (including two shows at Carnegie Hall in New York). In the Summer, Simon & Garfunkel played what turned out to be their farewell concert, practically in their own backyard, at Forest Hills Stadium (Queens, New York).

There was no definitive date for the breakup of Simon & Garfunkel. It can better be described as a sort of evolution. Several factors can be set forth as having at least some impact on the duo's split. First, there was the phenomenal success of BRIDGE OVER TROUBLED WATER, by almost unanimous consent, a work of fine craftsmanship. How could Simon & Garfunkel possibly follow-up on such a highly-acclaimed record? Paul was quoted as saying, "I'm delighted that I didn't have to write a follow-up, which I think would have been hard on both of us."  Paul was not particularly interested in touring, saying, "I didn't want to go on tour. I didn't want to sing 'Scarborough Fair' again. I didn't want to sing all of those Simon & Garfunkel songs every night." Paul was concerned that Art's movie career was overshadowing the duo's work. Art countered, "it was no more than a diversion for me, an opportunity that came along. To call it a change in career

or a conscious new direction on my behalf is completely false and incorrect." Art also felt that "Art Garfunkel" as a successful movie actor could only help the image of Simon & Garfunkel as a talented duo. But finally, it probably came down to this:  Paul and Art had different tastes in music.  Paul said, "I wouldn't say my ideas were bigger than Simon & Garfunkel, but I would say that my ideas were different from Simon & Garfunkel. And I didn't want to go in that direction of a duo." Art felt differently, he told Victoria Kingston, in her book SIMON & GARFUNKEL: THE DEFINITIVE BIOGRAPHY, "Personally, I would have gone on to make an album that was much better than "BRIDGE", simply because I don't think there was anything restrictive about our format. I didn't feel we had to fit into any set pattern." Art continued, "We both felt that the amount of fun we got out of being Simon & Garfunkel was getting to the crucial point where it was not really worth the effort." Paul later said, "During the making of 'Bridge', there were lots of times when it just wasn't fun to work together."

Although the partnership was not going to last, they both parted amicably, knowing they would always be friends. In fact, Paul said of Artie, "To sing with Art Garfunkel is a very intimidating experience, because his voice is a wonderful gift and I always considered that my job was to surround it with some harmony and let it shine." 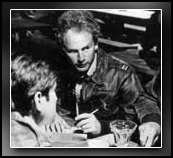 In June, Art Garfunkel appeared in his first motion picture, CATCH-22. Directed by Mike Nichols, this black comedy war picture, featured many fine actors, including; Alan Arkin, Orson Wells, Martin Sheen, Anthony Perkins, Martin Balsam and Jon Voight. Judith Crist wrote of Art's supporting role as Nately in a scene with an Italian pimp as "one of the unforgettable moments of CATCH-22." Gary Arnold of the Washington Post wrote, "He [Art] embodies a kind of youthful sweetness and idealism that the material desperately needs in the face of so many manic and inhuman characters."

During the Spring, Art Garfunkel began acting in his second Mike Nichol's film, "CARNAL KNOWLEDGE, which would be released in 1971. 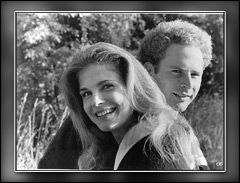 Art Garfunkel appeared in his second movie, CARNAL KNOWLEDGE. The film (released in June) was produced and directed by Mike Nichols (who also directed Art in CATCH-22). The story traces the friendship (and sexual escapades) of two men from their college days to middle age. Art played the sensitive and somewhat idealistic Sandy to Jack Nicholson's street smart Jonathan. TIME Magazine wrote of Artie's performance, "Singer Art Garfunkel has become an authentic screen presence, one of the few American actors who can portray naiveté."  As a result of working together on CARNAL KNOWLEDGE, Art and Jack Nicholson develop a lifelong friendship.  In fact, Jack 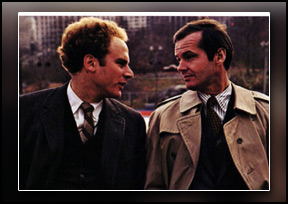 made sure Art was a special guest of his twenty years later when Hollywood celebrated Jack's career with a gala TV special. In fun, Jack even coaxed Art to sing "All I Have to Do is Dream" along with Harry Dean Stanton who obviously had troubling holding a note.  The audience ate it up.

In March, BRIDGE OVER TROUBLED WATER won a slew of Grammy Awards, including; Best Song, Best Record, Best Arrangement Accompanying Vocalists as well as Best Album of the Year.

Art spent the rest of the year teaching mathematics at a private school in Litchfield, Connecticut. He also studied the harpsichord in Yugoslavia, as well as classical music (especially the work of Bach).

Having traveled extensively in Europe studying classical music, Art Garfunkel decided it was time to start putting together a solo album. He met with several well-established pop writers, including Randy Newman and Jimmy Webb. Once Art found the material he needed to produce an entire album; he would spend an enormous amount of time in the studio perfecting every aspect of producing a record. 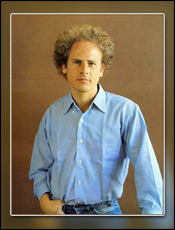 Art Garfunkel and Paul Simon reunited to work with Columbia on their GREATEST HITS album. Released in June, the album was a smash hit. It remained on the charts for several years: (US) for 131 weeks and (UK) for 179 weeks. The album included most of their major hits, including several never-before issued live versions ("Feelin' Groovy," Homeward Bound," "Kathy's Song," and an absolutely stunning version of Art singing "For Emily, Whenever I May Find Her").

In June, Art and Paul again reunite, this time for a benefit concert at New York's Madison Square Garden for the Democratic Presidential candidate George McGovern. The show was organized by Warren Beatty and included appearances by Peter, Paul and Mary as well as Mike Nichols and Elaine May.

In October, Art Garfunkel married Linda Grossman at her home in Nashville, Tennessee. Attending the ceremony and reception is long-time friend and former partner, Paul Simon.

On September 11th, ANGEL CLARE (US #5, UK #14), Art Garfunkel's first post Simon & Garfunkel solo album was released in September. "All I Know" (US #9), the first single from the album became a major hit (the album went gold on October 24th). Written by the composer Jimmy Webb, "All I Know" would be the first of many Jimmy Webb compositions performed by Art Garfunkel over the next two decades. The album was co-produced with Roy Halee with lots of orchestral backing and went on to yield two more singles: Van Morrison's "I Shall Sing" (US #38) and Paul Williams' "Traveling Boy." "Old Man" is a classic Randy Newman tune, and Art handles it with great care and superb vocals. The album was named after a character in Thomas Hardy's novel "Tess of the D'Urbervilles" (which Art had just read in July). In addition to Roy Halee, two other old friends show up on the album, Paul Simon on guitar and Larry Knechtel, the pianist from "Bridge Over Troubled Water." 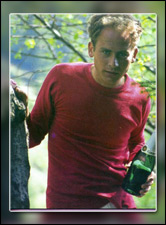 Other than a promotional concert at Columbia Studios in San Francisco (where Art lived while producing the album) in August, Art did not promote ANGEL CLARE with any concerts. In October, Art Garfunkel is the subject of a cover story in ROLLING STONE magazine.

In the October 8, 1973 issue of NEWSWEEK, Hubert Saal wrote a review of ANGEL CLARE - the article was entitled, "Solo Art."

When he and Paul Simon ended an eleven gold record partnership in 1970, Art Garfunkel was on the road to Hollywood stardom (Catch 22 and Carnal Knowledge). Now he realizes, "Acting was just a diversion. I've always felt committed to music; I love to sing."

Sing he does in his new solo album, ANGLE CLARE; his first since the sound of silence descended on Simon & Garfunkel. Garfunkel has painstakingly collected a roomful of songwriters, including Jimmy Webb, Van Morrison and Randy Newman. Most of the songs are upbeat and ..unremittingly cheerful...the appeal of that high, sweet tenor voice is forceful. Even Simon's mother admitted that Garfunkel was the better singer.

Receiving critical and commercial acclaim, ANGEL CLARE, in its second week on the Billboard chart, leaped to No. 20.

Second Avenue" (US #34) was released as a single in October (backed by "Woyaya" from ANGEL CLARE). Surprisingly, this hit single did not appear on Art Garfunkel's next album, BREAKAWAY. It would not make its way onto an album until 1988's GARFUNKEL (a US greatest hits album, but not nearly as complete as THE ART GARFUNKEL ALBUM, a European greatest hits compilation released in 1984). At the request of Eddie Simon (Paul's brother), Art Garfunkel gave a 3-hour harmony session at Eddie's guitar school in New York. Art Garfunkel moves to Los Angeles to start recording his next album, BREAKAWAY (released in 1975). 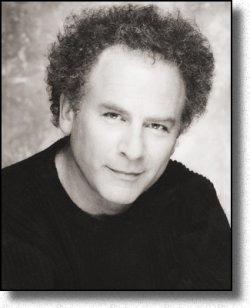