Excerpts from ‘What Is It All But Luminous: Notes from an Underground Man’ by Art Garfunkel

Part One of an ongoing celebration of Art Garfunkel, legendary singer and song champion, as well as poet and author, including daily installations from a remarkable new interview conducted during this lockdown 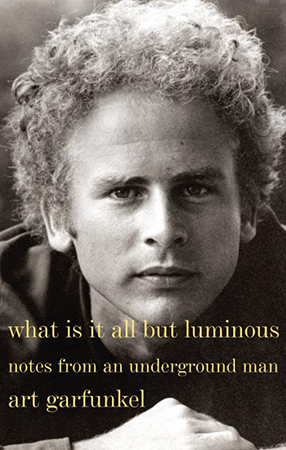 “For two-thirds of a century his arm has been around my shoulder,” wrote Art Garfunkel of his partner in song.

“He dazzled me with gifts. I nurtured him in his youth. He brought me into prominence. I taught him to sing. He connected my voice to the world. All of our personal belongings are intertwined. We say it’s exhausting to compete, but we shine for each other.”

From his highly unorthodox and thoroughly compelling memoir, those are the words of Art Garfunkel, more famous for singing the words of Paul Simon. Yet the man has a whole lot to say.

“We shine for each other.” That is essential, pure Garfunkel. It’s not about acknowledging the dissonance within this due know for their harmony. Instead he sees beyond the prevalent assumptions to show a fuller truth. Without each other, despite any squabbles ever, it’s probably neither would have ever succeeded alone. It was the merger of their disparate talents with all that bonded them that created the phenomenon.

Most everyone knows he is a singer. A famous, iconic singer. Although Simon is thought of as the writer in the duo, Garfunkel has been a writer since the very start. He and Simon wrote songs together, such as “Hey Schoolgirl” back when they were Tom & Jerry, before Simon & Garfunkel were born.

Artie’s also a poet (his book Still Water of poetry, and more) and an author (of the remarkably unconventional What Is It All But Luminous: Notes from An Underground Man, published in 2017.)

To kick off our Garfunkel celebration, which includes many segments from a new interview conducted weeks ago, we bring you this evidence of Garfunkel the writer. It’s a richly luminous excerpt from his memoir which touches on the roots of his relationship with his pal Paul.

From What Is It All But Luminous: Notes from An Underground Man, a memoir by Art Garfunkel

ART GARFUNKEL: On Saturday mornings, in 1953, in Keds sneakers, white on white, I took my basketball to P.S. 164. We played half-court ball, three on three. Or else I listened to Martin Block’s Make-Believe Ballroom on the radio. I loved to chart the top thirty songs. It was the numbers that got me.

I kept meticulous lists — when a new singer like Tony Bennett came onto the charts with “Rags to Riches.” I watched the record jump from, say, #23 to #14 in a week. The mathematics of the jumps went to my sense of fun. I was commercially aware through the Hit Parade, as well as involved in the music. Johnny Ray’s “Cry,” the Crewcuts’ “Sha-boom,” Roy Hamilton ballads, “Unchained Melody” reached me. Soon the Everly Brothers would take me for The Big Ride.

As I entered Parsons Junior High where the tough kids are, Paul Simon became my one and only friend. We saw each other’s uniqueness. We smoked our first cigarettes. We had retreated from all other kids. And we laughed.

I opened my school desk one day in 1954 and saw a note from Ira Green to a friend: “Listen to the radio tonight, I have a dedication to you.” I became aware that Alan Freed had taken this subversive music from Cleveland to New York City. He read dedications from teenage lovers before playing “Earth Angel,” “Sincerely.” When he played Little Richard’s “Long Tall Sally,” he left the studio mic open enough to hear him pounding a stack of telephone books to the backbeat. This was no Martin Block.

Maybe I was in the land of payola, of “back alley enterprise” and pill-head disc jockeying, but what I felt was that Alan Freed loved us kids to dance, romance, and fall in love, and the music would send us. It sent me for life. It was rhythm and blues. It was black. It was from New Orleans, Chicago, Philadelphia. It was dirty music (read sexual). One night Alan Freed called it “rock ‘n’ roll.” Hip was born for me. Chuck Berry, Jerry Lee Lewis. Bobby Freeman asked, “Do you wanna dance, squeeze and hug me all through the night?” and you knew she did.

I was captured. So was Paul. We followed WINS radio. Paul bought a guitar. We used my father’s wire recorder, then Paul’s Webcor tape machine. Holding rehearsals in our basements, we were little perfectionists. We put sound on sound (stacking two layers of our singing). With the courage to listen and cringe about how not right it was yet, we began to record. We were guitar-based little rockers. Paul had the guitar. We wrote streamlined harmonies whose intervals were thirds, as I learned it from the Andrews Sisters to Don and Phil and floated it over Paul’s chugging hammering-on-guitar technique. It was bluesy, it was rockabilly, it was rock ‘n’ roll. We took “woo-bop-a-loo-chi-ba” from Gene Vincent’s “Be-bop-a-lula.” We stole Buddy Holly’s country flavor (“Oh Boy”), the Everlys’ harmony (“Wake Up Little Susie”). Paul took Elvis’s everything (“Mystery Train”). As Paul drove the rhythm, I brought us into a vocal blend.

All the while, I did a lot of homework, the shy kid’s retreat. My geometry page was a model of perfection. Anything worth doing is worth doing extraordinarily well — why not best in the world?