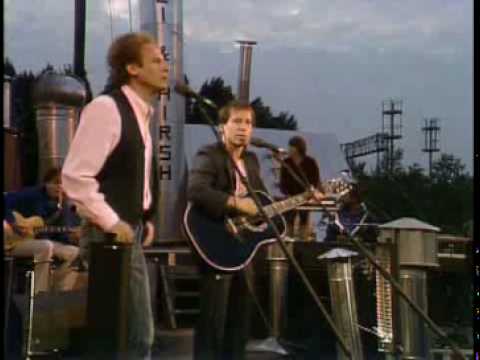 NEW YORK (UPI) — At least 500,000 fans huddled shoulder- to-shoulder under blankets in the evening chill on Central Park's Great Lawn listening to the melodies of Simon and Garfunkel, together in concert for the first time in 11 years. Police said the spellbound crowd was the largest ever to gather at the park, despite an occasional drizzle and temperatures in the low 60s. Some of the jean-clad music lovers hailed the duo's 1 ½ hour concert as an "urban Woodstock" that harked back to the idealism of youth in the 1960s.

Musician-composers Paul Simon and Art Garfunkel played mostly old favorites, starting with "Mrs. Robinson" and ending with "Sounds of Silence." One of the songs apparently was an original composed by the duo. It was rumored that if the concert went well, they might reunite permanently.

'Unbelievable' crowd. Detective Joseph Wolfe said the crowd size was "unbelievable." He estimated the crowd at 750,000 people, but most other police officers present put the crowd at about 500,000. "We came all the way out from L.A. because we heard they got back together and we wanted to see them," said Josetta and Seth Ellis, 26, from Los Angeles. Jack Macey, 17, of Philadelphia, said it was "very nostalgic," although he was only 7 when the duo broke up. "There are a lot of people here over 30," he said. "I love '60s, music, but I was too young to appreciate the Woodstock era. I don't like the '80s music."

Many weren't old enough to remember the duo's heyday. "It's the only thing that disappoints me," said Maura Swanson of Manhattan, a woman in her early 30s. "There are a lot of teenyboppers here. What do they remember about Simon and Garfunkel?"

300 camped out. Many of the students had come to New York for the weekend from Boston and Philadelphia, and had either spent the night with friends in the city or had camped out on the lawn with about 300 other ardent Simon and Garfunkel fans. "We got here about 9 p.m. last night," said Jake Rappaport, 19, who claimed he was one of the first to arrive. "We had about 12 people in our tent." "We took the train up last night from Yale," said Leslie Schick, another student. "We stayed with friends here in the city and came over here around 5:30 this morning." Among the youngest to arrive were Brian Davis and Jordan Steinberg, both 14 and from New York. "We only know about Simon and Garfunkel from records," said Davis. "But we got here at 9 last night and camped out." As thousands of young people sat around on blankets, drinking beer and eating, trucks brought in the last pieces of equipment to the bandstand and dumped sand in puddles created by the night's rain.

Simon and Garfunkel first hit the charts with the "Sounds of Silence." Their other hits included "Bridge Over Troubled Waters," "Mrs. Robinson" and "The Boxer." "It's a real privilege to hear them again," said Swanson. "Maybe they haven't been together in 11 years, but who's counting?" Donations and proceeds from the sale of promotional items will go toward the maintenance of the city's parks. As for getting together again, Simon said in a published interview: "If this concert in Central Park turns out to be enjoyable, for us and for the people who are there in the audience, then maybe we can plan to do a few more."

The duo has a quiet, melodious sound not unlike that of the folk groups that were popular in the early 1960s. But most of the young people on the lawn did not feel the reunion reflected a return to that time. "Simon and Garfunkel are for the "80s," said Mayor Edward Koch.