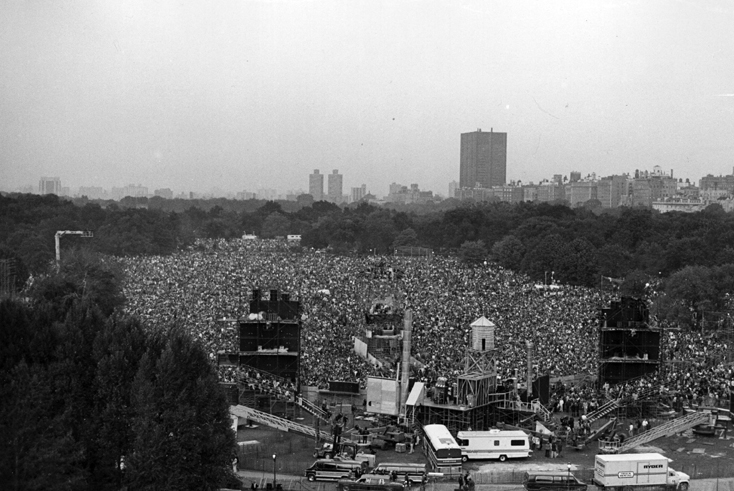 NEW YORK (AP) - An estimated 400,000 people jammed Central Park on Saturday evening for the first formal concert in nine years by Simon and Garfunkel, whose soft ballads and biting protest songs became anthems of the 1960s. "I feel very touched that so many people are here," Paul Simon said. Added Art Garfunkel: ''It feels like the biggest show I ever did in my life."

The duo began the free concert with a few of their biggest hits, "Mrs. Robinson," "Homeward Bound," and "America." At an impromptu news conference prior to their performance, the performers said they were not worried about light rain which had threatened the event because they "held a little prayer session."

The crowd, a mixture of young and old, covered five baseball fields on the park's I8 acre Great Lawn. Those who got front row spots showed up early Saturday morning despite a heavy downpour or camped out overnight. Outside the park, large numbers of people headed home when the concert began, complaining that because of the large crowd they could not get close enough to hear the music. Some 300 police officers were on hand to control the crowd, which they described as being "well-behaved" and "orderly."

The concert on the Great Lawn was free. Proceeds from the sale of souvenirs, Tshirts, buttons and other mementos were to go to the city Parks Department to help care for the Great Lawn and fund a parks horticulture intern program. Paul Simon and Art Garfunkel both live in New York, but the Parks Department originally asked Simon to solo. "But I thought I'd like to do a set with Artie and we kept adding more songs until we just said, 'Well, let's do the whole concert together,'" Simon said. "It was never meant to be a reuniting of the group. We're just doing it and see what happens."

The duo last formally performed in 1972 to raise funds for Sen. George McGovem's presidential campaign. Since then, they occasionally have teamed on an informal basis on recordings and on stage. Simon and Garfunkel began singing together in junior high school in the late 1950s as Tom and Jerry. They had some minor hits, but it was only after abandoning rock'n'roll that the string of hits began, starting with "Sounds of Silence." Their hits include "Homeward Bound," "America," "Scarborough Fair," "Dangling Conversation," and the theme music for "The Graduate," a movie that came to symbolize the youthful disenchantment of the 1960s.

Simon wrote the songs; Garfunkel, who later went into movies and appeared in "Carnal Knowledge" and "Catch-22," provided the distinctive harmonies. Their last joint recording effort was the album "Bridge Over Trouble Waters," which has sold more than 10 million copies. In addition to the title song, the record contains such Simon and Garfunkel standards as "The Boxer." It closed with a version of the Everly Brothers classic "Bye Bye Love."

"That's how we learned to sing, listening to the Everly Brothers," Garfunkel said recently. "Well, we tried to imitate their sound, but we're from New York and our singing just kept coming out New York," Simon added. "Basically, I guess, the blend we get is just an outgrowth of our friendship."