The Return of Greenburg and Garfunkel

One day in his freshman year, Sanford “Sandy” Greenberg ’62CC, ’67BUS stood on campus by a grassy plot with his classmate Arthur Garfunkel ’65CC.

“Sanford, look at that patch of grass. You see the colors? The shapes? The way the blades bend?”

Greenberg was smitten. Other guys talked about girls and sports, but Arthur wanted to talk about — a patch of grass!

Was there a luckier guy on campus than Greenberg? Here he was, a poor kid from Buffalo on full scholarship at Columbia, taking classes from Margaret Mead, Leon Lederman, James Shenton, and Mark Van Doren. And he had a great new pal, a brainy kid from Queens with a pure tenor voice.

But in the summer of 1960, just before junior year, Greenberg’s fortune changed. He was in Buffalo, playing baseball, when his vision “steamed up.” He had to lie down in the grass until the clouds went away.

The doctor said it was allergic conjunctivitis.

Back at school that fall, Greenberg had more episodes, but he didn’t tell anyone. He didn’t believe it was anything serious. Still, his roommates — Garfunkel and Jerry Speyer ’62CC, ’64BUS — saw that he was having trouble.

On the first morning of finals, Garfunkel escorted Greenberg to University Gym, where exams were held. Greenberg started writing at 9 a.m. By 10:30 he couldn’t see a thing. He lurched to the front of the gym and handed his blue book to the proctor.

The proctor laughed. “I’ve heard some terrific excuses,” he said, “but that’s the best.”

Greenberg went back to Buffalo, where he received another diagnosis: glaucoma. That winter, doctors operated on Greenberg’s eyes. The surgery didn’t work. Greenberg was going blind. He was so depressed that he refused to see anyone from college.

But Garfunkel came up to Buffalo anyway.

“Sanford,” said Garfunkel. “You must talk.”

Garfunkel persuaded Greenberg to come back to Columbia, and offered to be his reader.

In September 1961, Greenberg returned to campus. Garfunkel, Speyer, and Michael Mukasey ’63CC read textbooks to him, taking time out from their own studies, and Greenberg ended up scoring straight As. Still, he was tentative about getting around alone and relied on his friends to help him.

Then, one afternoon, Greenberg and Garfunkel went to Midtown. When it was time for Greenberg to go back to campus, Garfunkel said he had an appointment and couldn’t accompany him. Greenberg panicked. They argued, and Garfunkel walked off, leaving Greenberg alone in Grand Central Terminal. Greenberg, bewildered, stumbled through the rush-hour crowd. He took the shuttle to Times Square, transferred to the 1 train, and got out at 116th and Broadway. At the gates, someone bumped into him.

Greenberg knew the voice. It was Arthur. Greenberg’s first reaction was rage, but in the next second he realized what he had just accomplished — and realized, too, who had made it possible.

“It was one of the most brilliant strategies,” Greenberg says. “Arthur, of course, had been with me the whole way.”

After graduation, Greenberg got his MBA from Columbia and a PhD from Harvard. He married his girlfriend, Sue; was a White House fellow in the Johnson administration; and went on to become a successful inventor and businessman.

In 2014, Greenberg told the subway story on Charlie Rose. Soon after, Susan Goldberg, the editor in chief of National Geographic, contacted him. She was planning an issue on blindness, and she asked Greenberg if he and Garfunkel would re-create their Midtown-to-Morningside journey. 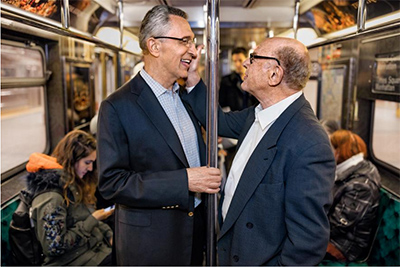 The old friends agreed to do it. For one thing, a piece in National Geographic would bring attention to Greenberg’s major cause. In 2012, he started an initiative called End Blindness by 20/20, which will award three million dollars in gold to the person (or persons) who does the most to achieve the goal by that target year.

This past March, Greenberg and Garfunkel, with a camera crew in tow, made their way from Grand Central to Morningside Heights. Photograph on right by Brent Stirton

On Low Plaza, Greenberg, smiling, recalled Garfunkel reading him Our Town, which, he says, was their “manual for living.” The play’s message is that humans, caught up in daily concerns, fail to appreciate life’s beauty and preciousness. “That’s all human beings are!” says the character Emily Gibbs, a dead woman looking down upon the living and astonished by their folly. “Just blind people!”

Not Greenberg. He sees everything, sings every blessing, great and small: from the love of his family and friends to the dew-dappled grooves of a blade of grass.

“You are talking,” he says, “to the luckiest man in the world.”