Composed by JIMMY WEBB, performed by ART GARFUNKEL and AMY GRANT, and backed by the London Symphony Orchestra and the Kings College School Choir. This magnificently produced cantata tells the story of the Nativity from the perspective of the animals who were there. Read Art's comments on The Animals' Christmas.

Click to hear audio clips.
To order this CD. 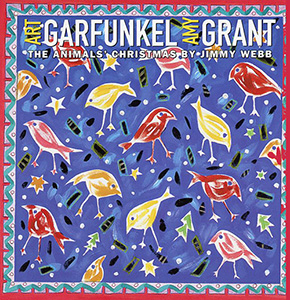 Below is one of four interviews from Still Water

Interviewer: How did The Animals' Christmas recording come about?

Art Garfunkel:  The Animals' Christmas took up the middle of the Eighties for me; it finally came out in Christmas of '86 after four years of my performing it and then recording it.  In the early Eighties, in September of 1981, Paul Simon and I did a concert in Central Park.  We followed it by touring the world; a European tour, an Australian tour, a Japanese tour, and finally a baseball-stadium tour in the U.S.A. in the summer of '83.  As that baseball-stadium tour was finishing with two Swiss shows and two shows in Israel, I knew that the future was mine.  I was open to what would come next.  That's how I began to write what became this book.  And I also startedThe Animals' Christmas.  In '83, my friend Jimmy Webb showed me a piece he was writing, a cantata for children's choir and small orchestra for his local church in Tuxedo, New York.  And it being a noncommercial endeavor, I was particularly interested in it, because I had become cynical about the fact that the record business will professionalize one's musical attempts in a way that can hurt them.   And I followed Jimmy's rehearsals in Tuxedo and lovedThe Animals' Christmas.   I told him I wanted to get involved.  By the next year, he had written an extension, doubled its length and wrote various sections for me as solo singer, narrator and the angel Gabriel.  He added a woman's part - the Virgin Mary.  We all performed it with orchestra, children's choir, boy singer, girl singer, at St. John the Divine Cathedral that December in New York, and also at Festival Hall in London.  We made a live recording of the shows, which later seemed to me too loose.  So we planned to record it in the studio, the following Christmas.  I started in London in '85 and recorded the London Symphony Orchestra; we added the choir from Wimbledon that winter; come the spring I was in Montserrat doing my vocals with Geoff Emeric; I traveled to Nashville to get Amy Grant's vocals on the album, then came to New York for some percussion overdubs - Steve Gadd on drums, and others.  I had it finished by Christmas of '86, which I gather is when it came out.  It's a gothic cathedral of an album; it's very ambitious.  It was the type of project that would have been done by papal commission long ago.

Interviewer: So it was a very satisfying experience?

Art Garfunkel:  Some artistic endeavors are more committed than others.   You try to run the full mile with everything; sometimes you really get to do it.   That was one of those times.  Another was doing BadTiming, the movie I made with Nic Roeg.  That was a ferocious "race for the gold."

Interviewer:   You use the line "Tomorrow it's over. Tonight is all".  Do you feel this every time you perform?

Art Garfunkel: Yes.  When you're onstage, that time is an island.  We don't normally spend our lives with the spirit called forth and flowing, coming up and out; it's a wonderful. ecstasy to be there.

Art Garfunkel: It is wonderful; it's a very lucky thing.